It was a big happy birthday to Flamboyance Tours on January 21 – I can hardly believe that a year has already passed since it launched! It’s amazing how quickly 12 months can go, and also what can be achieved in that time. I wanted to write this blog post as an open overview of what my small business has achieved in its initial chapter.

Thinking back on the first day of operation, I looked ready on the outside but was a bundle of nerves on the inside. I’d barely got my flyers into distribution points, I had no idea if anyone would come for the tips-based walking tour, and I was putting myself out there by standing with a sign in the middle of Adelaide’s main shopping area, Rundle Mall. I had a friend for support… which helped soften the blow when no one arrived.

There were a few more days with a similar result, but when I had my first travellers arrive, I’m filled with this utter sense of relief mixed with an ‘oh my goodness, something has worked’! And from there it’s evolved into the great Adelaide walking tour it is, where I’ve guided travellers from more than 40 countries and all states and territories in Australia. Local workers have come with me on customised private tours for office bonding, business owners and politicians have enjoyed my knowledge, and Flamboyance Tours has also entered the special event realm with Pride March and Feast Festival offerings.

Launching other tours at the same time, my in-depth itineraries have steadily grown. The F Factor is a perfectly short and sweet way of showing travellers what Adelaide’s great local foods are, and my small-group intimate walk has been well received for showing local perspective on a deep level. But I’ve learnt things too – trying to promote a Chinese tour is very different to getting the word out there on English tours. Thankfully I’ve had great encouragement from my first Chinese guide Alice, and also Yalin, who is now ready to take any Chinese travellers that come our way.

A company highlight was definitely the award nomination given to Flamboyance Tours for New Tourism Business at the South Australian Tourism Awards in November. To be recognised on an industry scale against much bigger tourism and accommodation companies in South Australia is something I’ll always be extremely proud of. The judges look at a multitude of things, from products of offer to how the business operates, and for a one-person business it’s a lot to have covered. It showed me that hard work and persistence does paid off. Which is why I thought it was worth cutting a cake in celebration of Flamboyance’s first birthday! 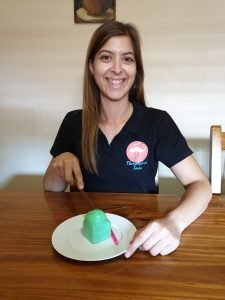 That’s what I’ve really come to terms with in year one of running a business – it’s so much more than just putting out some flyers and hoping people will show up. Money needs to be spent to get the word out there, and important decisions need to be made on what comes next to push what you’re doing one step further. And it doesn’t stop there. You’re constantly learning.

As a businesswoman I’ve learnt a lot so far and year two holds a lot in store as far as I’m concerned. I eluded to this a little bit already in a recent post of what cool things will come about in 2020. I’m so excited to mark this first birthday milestone and surge forward for year two. I’m hopeful of bringing more unique Adelaide tours to travellers and locals alike – real EXPERIENCES. And I’m hopeful of continuing to bring a professional service to people in the way I know how, with a bit of fun, flamboyance and finesse!

Missed the last post? I wrote about what to expect in an Adelaide summer.