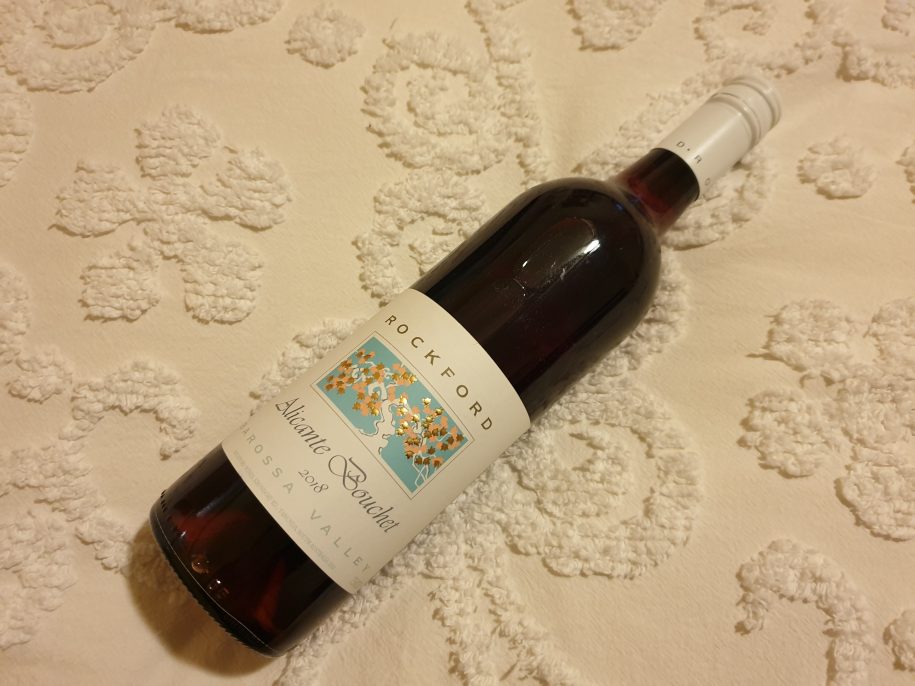 This is the third of five Local Customs blogs. Each week I’ll be publishing something great about South Australian customs!

I’ve previously talked about Kaurna Aboriginal culture and South Australian slang as part of this series on local customs, but now, I’m going to talk about wine. To consume wine is a local custom among the majority of South Australians, and one wine blend has never seemed to go out of fashion since it first became fashionable. I am, of course, talking about Rockford Wines’ Alicante Bouchet.

The Alicante Bouchet blend (spelled Alicante Bouschet elsewhere) is a special variant of rose, magenta in colour, for its pressing from the red-fleshed teinturier grape. It’s been described as “strawberries and cream, with sugar and spice”. It has notes of cherries, and cranberries, with a clean and dry finish. Where to place it has at times confused sommeliers, who in scattered instances have supposedly put the blend on a list of red wines for purchase. While technically correct, to suggest it’s anything but a rose is a bit rich.

It’s common to see a group of women in Adelaide out for dinner notice that this wine is on a menu and immediately grab bottles for the table. I’ve definitely been privy to that (that’s my screenshot there…). It’s not just that stereotype though – wine drinkers of all sorts are used to having this blend feature in their weekend outings, or form part of a trip to the iconic Barossa Valley where this winery and its vineyards reside.

So why is it the wine of choice in Adelaide circles? Where does its cult status come from? It’s a hard question to answer – there’s not a lot of information out there on how it got to the point that it has. Not many Australian wineries have these grapes in their vineyards, so the Rockford variety already has a bit going for it. There’s also the fact it’s never been widely available in stores, but that’s the case for many wineries who choose to largely sell from the cellar door. What I do know is it really came to be known around the city around the 2009-2010 mark, and it’s my belief that it just grew organically to become a go-to drink of choice.

It was at that time that I personally was getting on the rose train, as it had risen around that period as the new ‘it’ drink, as gin did around 2017-2018 (and is still the ‘it’ drink in 2020). I was going through what I call ‘21st season’, partying the weekends away at 21st birthdays left, right and centre, and rose was what I got rather drunk on at multiple events. At this time the Rockford Alicante Bouchet was not only making its way into my palate and my heart, but also to those of many across Adelaide.

My own mother has always gained excitement from seeing Rockford Alicante Bouchet on a wine list when out, because in her words, “it’s easy to drink, it’s light”. Not too experimental with wines, she’s happy with the familiarity of an oldie but a goodie, even a decade later. It was around “10 years ago” (2010) she was introduced to it by my aunty, and she’s never looked back. This is the only wine my mum will really seek out when driving to the Barossa, so for her, as with many others I’m sure, good memories as well as good tastes are associated with the drink.

There’s debate among many wine aficionados about the taste, so it’s not for everyone – but what do I think of the varietal now? The last time I had this Alicante Bouchet I found I wasn’t digging it as much as I used to. But my palate is constantly changing as I discover and rediscover certain blends, so that could easily change again. I may have just had an off day, and at the time of writing there’s a couple of bottles in my household waiting to be consumed. For what Rockford offers, it’s a great point of difference, and I always like turning to a rose for its versatility of what to have with dishes. This one is generally considered to go with light, spicy Asian dishes really well. InDaily also wrote of the blend’s appeal well in 2014: “The style of the of Alicante Bouschet is universally popular because it seems to bridge the gap in consumer taste. Not too sweet, not too dry, just right.”

I would love to get your thoughts on this drink – your first impression of it and if that’s changed over time, when you first discovered it, and why you think it’s so popular in Adelaide even today. I mean, there’s got to be something to it – it still has a Facebook page with about 2500 followers!

Missed the last post? The second of our Local Customs series shared a snippet of Kaurna Aboriginal culture!