This is the fifth and last of our Local Customs blogs. There are links to the previous four at the end of the post!

The wonderful game of Australian Rules football, run under the Australian Football League (AFL), has graced our country for about 150 years. In that time, the adage that blood runs thicker than water rings true for fans of the sport; those who are ferociously devoted to their team. South Australia has a proud football history on both a state and national level, and we’re proud of showing it. It’s local custom here to love our ‘footy’.

The South Australian National Football League (SANFL, pronounced san-ful) dates back to 1877 and is the oldest state football association in Australia. Yes, even older than Victoria’s league – by a week! Some of the actual teams’ inceptions pre-date this, including the first Adelaide Football Club from 1860, and the Port Adelaide Magpies, which has its roots from 1870. This is Adelaide’s semi-professional league, with all teams being based and representing a section of the city. Regional areas then have their own amateur leagues. 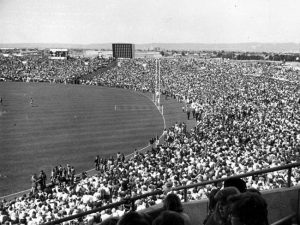 There are some fierce rivalries within the state’s competition – the biggest is said to be Port Adelaide versus the Norwood Redlegs, though Port against the Sturt Blues is also a notable rivalry from the 1960s and 1970s, and also Port versus the Glenelg Tigers. There’s always one team in a league everyone loves to hate, so any team versus Port is generally a rivalry. Then you have some cracking grand finals like the 1978 decider – Sturt vs Norwood. Watch the last five minutes in a clip here… I won’t tell you which of those teams I support!

Then there is the national competition – the AFL. It is an expansion of the Victorian Football League, formed in 1987 with the inclusion of teams from Perth and Brisbane, but officially named the AFL from 1990. South Australia has two teams in the league – the Adelaide Crows, since 1991, and Port Adelaide Power, since 1997. To say there’s a fierce rivalry between our two teams would be an understatement.

As it was in my parents’ generation where you would basically support your SANFL team from birth – from what team their parents supported, where you lived, etc, the same goes for my generation regarding your AFL team. Not everyone follows this though – within my family, my brother goes for one team while I go for the other.

Because of this, it is local custom for many South Australians to then justify backing their team until the end of their days. Until something goes horribly wrong, and then many will just give up on their team for a while until they start doing better again. OK, that’s a bit harsh – I know people who would do that, but also those who would truly never walk away from their team. 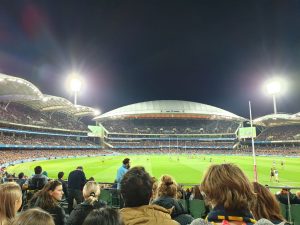 South Australians are used to football talk for six months of the year, whether they’re a supporter or not. If you’re not, you’re basically on the outer of a lot of water-cooler conversation in the office. The game really does take over the city of Adelaide, and the state, during that time. And the most ferocious time comes twice in the season when the Showdown hits, the local derby between the Crows and Power. The Showdown is stuff of legends – from on-field brawls to off-field spats, the rivalry between the two teams has had it all in its first few decades. There have been waves of dominance from one team, then a shift to the other, with many matches featuring a close result.

Why are South Australians so obsessed with AFL? It’s the rivalry! This state has some of the most intense rivalry, with the Showdowns in the national league, and the everyone-versus-Port dynamic in the SANFL. In turn, these create great competition, passionate loyalty and a prouder attitude than ever in calling ourselves South Australian. It’s a local custom to revel in Australian Rules football rivalries because it makes us as parochial as ever.

Missed the last post? The fourth Local Customs blog had a look at the sense of Adelaide nostalgia that seems to exist.